Get BusinessBalls Premium for yourself or your organisation. Find out more here.

The 'Forming, Storming, Norming, Performing' theory is an elegant and helpful explanation of team development and behaviour. Similarities can be seen with other models, such as Tannenbaum and Schmidt Continuum and especially with Hersey and Blanchard's Situational Leadership® model, developed about the same time. Both of these theories and how they overlap with Tuckman's model will be briefly outlined below.

Why is Tuckman's Model useful?

Tuckman's model explains that as the team develops maturity and ability, relationships establish, and the leader changes leadership style. Beginning with a directing style, moving through coaching, then participating and finishing with delegation, at which point they are almost detached. At this point, the team may produce a successor leader and the previous leader can move on to develop a new team.

What are the Four Stages of Team Development?

Below the features of each phase will be outlined in detail.

This is a diagram of Tuckman's four stages of team development. Below is an outline of the fifth stage, which Tuckman only added later after refining his theory. 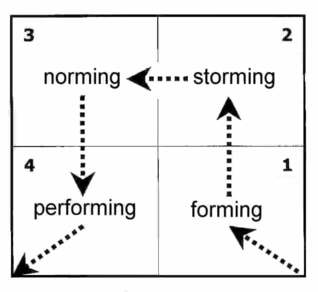 Bruce Tuckman refined his theory in 1975 and added a fifth stage to the 'Forming, Storming, Norming, Performing' model: Adjourning. This is also referred to as Deforming and Mourning.

Adjourning is arguably more of an adjunct to the original four-stage model rather than an extension - it views the group from a perspective beyond the purpose of the first four stages.

The Adjourning phase is certainly very relevant to the people in the group and their well-being, but not to the main task of managing and developing a team, which is more central to the original four stages.

Tuckman's fifth stage, Adjourning, is the break-up of the group, once the task is completed successfully and its purpose fulfilled. 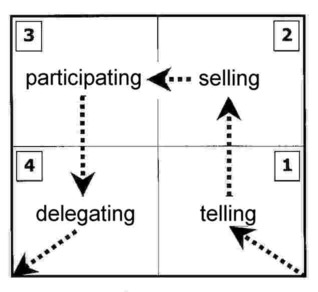 The classic Situational Leadership® model of management and leadership style also illustrates the ideal development of a team from immaturity (stage 1) through to maturity (stage 4).

According to this model, the leadership style progressively develops from relatively detached task-directing (1), through the more managerially-involved stages of explanation (2) and participation (3), to the final stage of relatively detached delegation (4), at which time ideally the team is largely self-managing, and contains at least one potential management/leadership successor.

The aim of the leader or manager is, therefore, to develop the team through the four stages, and then to progress on to another role.

The model also illustrates four main leadership and management styles, which a good leader can switch between, depending on the situation (i.e., the team's maturity relating to a particular task, project or challenge).

The Tannenbaum and Schmidt Continuum also correlates or overlaps with the models above in the sense that management style tends to offer more freedom as the group matures.

The diagonal line loosely equates to the dotted line on the other two models. As the team matures and becomes more self-sufficient and self-directing, so the manager's style should react accordingly, ideally becoming more detached, more delegating, encouraging and enabling the group to run itself, and for a successor to emerge.

See the Tannenbaum and Schmidt page for more detailed notes about this model.

Other Resources Relevant to Team Development

Thanks to S Doran for the suggestion. And thanks also C Lloyd for pointing out the error in these diagrams, duly corrected Aug 2008 - storming and norming were inverted.

Next: Delegating: Tannenbaum and Schmidt Continuum