What is the Johari Window Model?

The Johari Window model is a simple and useful tool for illustrating and improving self-awareness, and mutual understanding between individuals within a group. This model can also be used to assess and improve a group's relationship with other groups. This model is particularly useful in team development.

It was devised by American psychologists Joseph Luft and Harry Ingham in 1955 while researching group dynamics at the University of California Los Angeles. The model was first published in the Proceedings of the Western Training Laboratory in Group Development by UCLA Extension Office in 1955 and was later expanded by Joseph Luft. Today the Johari Window model is especially relevant due to modern emphasis on, and influence of, 'soft' skills, behaviour, empathy, cooperation, inter-group development and interpersonal development.

The Johari Window concept is particularly helpful in understanding employee/employer relationships within the Psychological Contract. Over the years, alternative terminology has been developed and adapted by different people - particularly leading to different descriptions of the four regions, hence the use of different terms in this explanation.

Download the Johari Window Model as a pdf file here:

How is the Johari Window Model used?

This model is also referred to as a 'disclosure/feedback model of "self-awareness" and by some people an "information processing tool".

What are the Four Regions of the Johari Window Model? 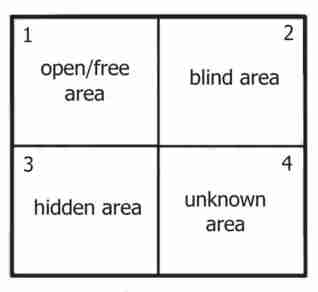 This is the standard representation of the Johari Window model, showing each quadrant the same size.

The four 'panes' can be changed in size to reflect the relevant proportions of each type of 'knowledge' of/about a particular person in a given group or team situation.

Explanation of the Johari Window Model

Refer to the free detailed Johari Window model diagram in the free resources section - print a copy and it will help you to understand what follows.

Region 1 is also known as the 'area of free activity'. This is the information about the person - behaviour, attitude, feelings, emotion, knowledge, experience, skills, views, etc. - known by the person ('the self') and known by the group ('others').

The aim in any group should always be to develop the 'open area' for every person because when we work in this area with others we are at our most effective and productive, and the group is at its most productive too. The open free area, or 'the arena', can be seen as the space where good communications and cooperation occur, free from distractions, mistrust, confusion, conflict and misunderstanding.

Region 2 is what is known about a person by others in the group, but is unknown by the person him/herself.

Group members and managers can take some responsibility for helping an individual to reduce their blind area - in turn increasing the open area - by giving sensitive feedback and encouraging disclosure.

'Hidden Self' or 'Hidden Area' or 'Avoided Self' or 'Facade'

Region 3 is what is known to ourselves but kept hidden from, and therefore unknown, to others.

Relevant hidden information and feelings, etc, should be moved into the open area through the process of 'disclosure'.

Organizational culture and working atmosphere have a major influence on group members' preparedness to disclose their hidden selves. Most people fear judgement or vulnerability and therefore hold back hidden information and feelings, etc., that if moved into the open area, i.e known by the group as well, would enhance mutual understanding, and thereby improve group awareness, enabling better individual performance and group effectiveness.

The extent to which an individual discloses personal feelings and information, and the issues which are disclosed, and to whom, must always be at the individual's own discretion. As with feedback, some people are more resilient than others - care needs to be taken to avoid causing emotional upset. Also as with soliciting feedback, the process of serious disclosure relates to the process of 'self-actualization' described in Maslow's Hierarchy of Needs development and motivation model.

'Unknown Self' or 'Area of Unknown Activity' or 'Unknown Area'

Region 4 contains information, feelings, latent abilities, aptitudes, experiences etc, that are unknown to the person him/herself and unknown to others in the group. These unknown issues take a variety of forms:

Examples of unknown factors are as follows, and the first example is particularly relevant and common, especially in typical organizations and teams:

The processes by which this information and knowledge can be uncovered are various and can be prompted through self-discovery or observation by others, or in certain situations through collective or mutual discovery, of the sort of discovery, experienced on outward bound courses or other deep or intensive group work. Counselling can also uncover unknown issues, but this would then be known to the person and by one other, rather than by a group.

Managers and leaders can help by creating an environment that encourages self-discovery, and promoting the processes of self-discovery, constructive observation and feedback among team members.  Creating a culture, climate and expectation for self-discovery helps people to fulfil more of their potential and thereby to achieve more, and to contribute more to organisational performance.

Note: The unknown area could also include repressed or subconscious feelings rooted within formative events and traumatic past experiences, which can stay unknown for a lifetime. In a work or organisational context, the Johari Window should not be used to address issues of a clinical nature. Useful references are Arthur Janov's seminal book "The Primal Scream" (read about the book here) and  Transactional Analysis.

Examples of the Johari Window Model 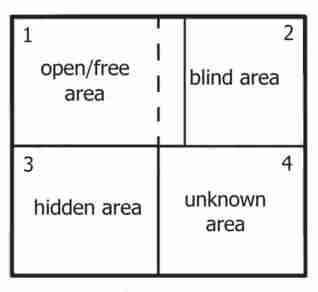 This Johari Window model diagram is an example of increasing the open area, by reduction of the blind area, which would normally be achieved through the process of asking for and then receiving feedback.

A team that understands itself - that is, each person having a strong mutual understanding with the team - is far more effective than a team that does not understand each other- that is, whose members have large hidden, blind, and/or unknown areas.

Team members - and leaders - should always be striving to increase their open free areas, and to reduce their blind, hidden and unknown areas.

Impact on effectiveness: A person represented by the Johari Window example below will not perform to their best potential, and the team will fail to make full use of the team's potential and the person's potential too. Efforts should generally be made by the person to increase his/her open free area, by disclosing information about his/her feelings, experience, views, motivation, etc, which will reduce the size of the hidden area, and increase the open free area.

Example 2 - New Team Member or Member Within a New Team 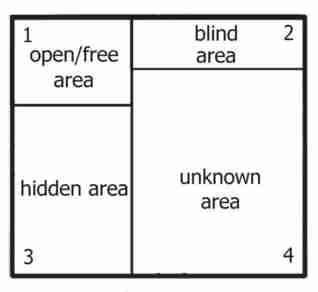 This Johari Window model diagram is an example of a member of a new team or a person who is new to an existing team.


In this particular example, the unknown area is the largest, which might be because the person is young or lacking in self-knowledge or belief. 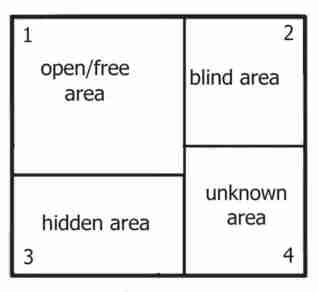 This Johari Window model diagram is an example of an established member of a team.

The examples of exercises using the Johari Window theory on this website might begin to open possibilities for you. The Johari Window obviously model provides useful background rationale and justification for most things that you might think to do with people relating to developing mutual and self-awareness, all of which links strongly to team effectiveness and harmony.

There are many ways to use the Johari model in learning and development - much as using any other theory such as Maslow's, Tuckman's,  Transactional Analysis or NLP. It very much depends on what you want to achieve. This being the case, it might help you to ask yourself first:

Then think about how the Johari Window theory and principles can be used to assist this.


Researching academic papers (most typically published on university and learning institutions websites) written about theories such as Johari is a fertile method of exploring possibilities for concepts and models like Johari. This approach tends to improve your in-depth understanding, instead of simply using specific interpretations or applications 'off-the-shelf', which in themselves might provide good ideas for a one-off session, but will not help you much with understanding how to use the thinking at a deeper level.

Also, explore the original work of Ingham and Luft, and reviews of same, relating to the development and applications of the model.

Johari is a very elegant and potent model, and as with other powerful ideas, simply helping people to understand is the most effective way to optimise the value to people. Explaining the meaning of the Johari Window theory to people, so they can really properly understand it in their own terms, then empowers people to use the thinking in their own way, and to incorporate the underlying principles into their future thinking and behaviour.