What is Situational Leadership?

Features of The Situational Leadership Model

The Situational Leadership® model is sophisticated. Its notable features are briefly that the model:

These points are explained in greater detail below.

Situational Leadership® theory is commonly shown as classifying followers according to a 2x2 matrix, using the highs and lows of two criteria, thereby giving four types of follower groups.

Accordingly, this summary refers mainly to 'follower' or 'followers', rather than a 'group', in explaining how the model is best appreciated and used. The criteria of the followers are outlined below.

The term 'follower' may be interpreted to apply to an entire group for situations in which members possess similar levels of capability and experience:

Logically the four group types are:

Extending the logic of this, Hersey and Blanchard further described and presented these four followers 'situations' as requiring relatively high or low leadership emphasis on the Task and the Relationship.

The high/low Task/Relationship dimensions feature strongly in the diagrams and applications that Hersey and Blanchard developed around the Situational Leadership® theory.

The logic can be represented helpfully as a simple practical concise 'leadership styles guide', as below, including the continuum, by which the leader changes styles in response to the growing/different maturity of followers.

Given the name of the Situational Leadership® theory, it's useful to note that Hersey and Blanchard used the word 'situational' chiefly to suggest adaptability, more than the situation in which people operate.

Hersey and Blanchard used the word 'maturity' in referring to the continuum of follower development, requiring and enabling a leader to change leadership style through the stages outlined above.

Comparison with Other Leadership Models

This aspect aligns somewhat with the Tannenbaum and Schmidt Continuum model, specifically limited to where both models can apply to group maturity/capability development.

That is, under certain circumstances, a leader adapts his/her behaviour progressively, in response to followers' growing maturity/capability, usually over many months, potentially from the inception or inheritance of a new team, ultimately to when the team can self-manage, perhaps even (and some would say ideally) to be led by a new leader who has emerged from the team to succeed the departing leader.

Hersey and Blanchard's 2x2 matrix, or four-square grid, has become a much-referenced tool, and proprietary training method, for teaching and applying the Situational Leadership® model, notably matching the four leadership behaviours/styles to corresponding follower situations (or to 'entire group' situations, subject to the provisions already explained, that followers must possess similar levels of ability and experience as each other). 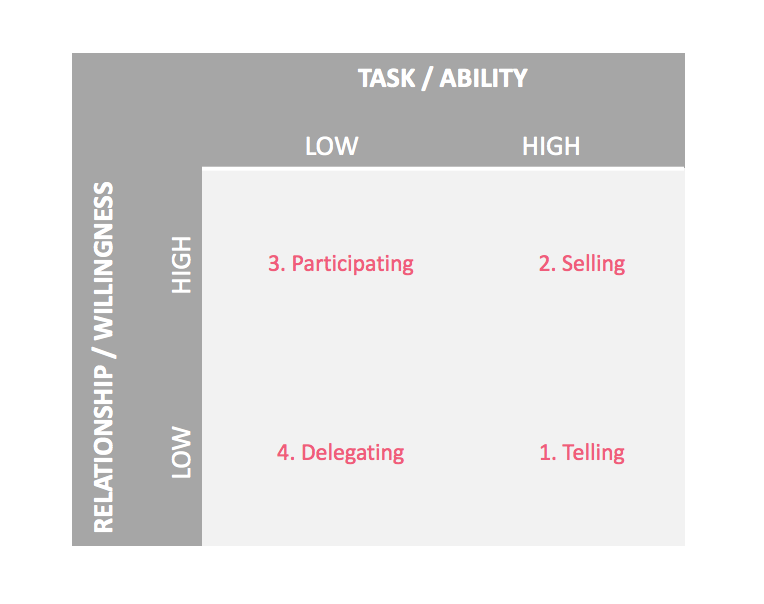 Below is an outline of Hersey and Blanchard's matched sets of four follower types with four corresponding leadership styles, in order of the suggested continuum or progression coinciding with increasing follower maturity.

The basic Situational Leadership® model can also be seen as a simple leadership process:

The Situational Leadership® model is widely taught and highly regarded.

We are grateful to James Scouller for his help, patience, and expert contribution in producing this leadership guide.

James Scouller is an expert coach and partner at The Scouller Partnership in the UK, which specialises in coaching leaders. He was chief executive of three international companies for eleven years before becoming a professional coach in 2004. He holds two postgraduate coaching qualifications and training in applied psychology at the Institute of Psychosynthesis in London.

James Scouller's book is called "The Three Levels of Leadership: How to Develop Your Leadership Presence, Know-how and Skill" which was published in May 2011.

Next: Four-Frame Model - Bolman and Deal