Emergent Knowledge is a therapeutic methodology, developed by David J Grove (1950-2008), a New Zealand therapist. It extends David Grove's earlier work and ideas on Clean Language, in which a facilitator, coach, counsellor or therapist is emphatically neutral in the process. All inputs from the facilitator are free of bias and influence; the process is 'Clean' - free of contamination - hence the terminology.

While initially used in clinical therapy (David Grove's primary experience) Emergent Knowledge offers helpful techniques to all who work closely and helpfully with others - for example coaches, counsellors, caring leaders and managers and so on.

The process taps into the subject's (person being helped) own intuition. Grove said that intuition is the 'primary guide' of the process. Therefore to some people, the concept will seem very different from the conventional or logical 'taught' approach to problem-solving and personal change.

Traditional management and training usually entail imposition and direction from the manager/trainer/coach, resulting in the 'coachee' being led and strongly influenced, rather than finding his/her own way towards greater self-fulfilment and expression. In the modern age, people seek and respond better to methods which offer genuine personal growth. In this respect, Grove's concept is aligned well with today's progressive thinking for working with and helping others.

The Development of the Emergent Knowledge Concept

The Concept of Clean Space

David Grove initially developed the Clean Language methodology while working with traumatic memory cases during the 1980s. He discovered that patients (typically Vietnam veterans or victims of child abuse) would often speak in metaphor (expressing something using a different concept or image) to describe their experience and that the most effective way of resolving their trauma was to encourage exploration of these metaphors with the least possible interference from the therapist.

Grove found that subjects would discover new self-knowledge in different positions within or sometimes outside of the room (even at times in the car-park) and that they seemed to know instinctively which space would enable them to do this.

Try a quick 'Clean Space' experiment.. Go stand on a chair in the corner of the room. Do things start to look and feel different? If so you've just demonstrated how we think differently when we adopt a completely different physical position...

Emergent Knowledge for Coaching and Counselling

In 2004, Carol Wilson, who contributed the technical content for this explanation, began assisting David Grove's development of the Emergent Knowledge concept, significantly for applications outside of therapy - for example in coaching and counselling - so that the techniques may be used by coaches and trainers without clinical or therapeutic qualifications.

In this respect, Emergent Knowledge is similar to other methodologies originating in clinical work and subsequently adapted for wider use in management, training, coaching, counselling and so on.

Emergence as a science or philosophy has been studied and written about for thousands of years. It essentially concerns the way systems (societies particularly) organise themselves over time.

It's a way of looking at how systems evolve. For example:

The principle of Emergence contains a strong element of interaction with and adaptation to a wider system - in other words, the sense of something progressively refining and developing by 'learning' from countless interactions with a large surrounding environment.

This philosophical underpinning is significant in Grove's theory, and how to understand it. Cybernetics is another way to look at Emergence, and helps explain how and why Emergent development is so effective.

These statements by David Grove help convey how the man himself saw the Emergent Knowledge methodology.

Note the spiritual quality of the language. The ethos is radically different to traditional goal-planning and task-driven personal development.

Below is a simple diagram representation of the theory. 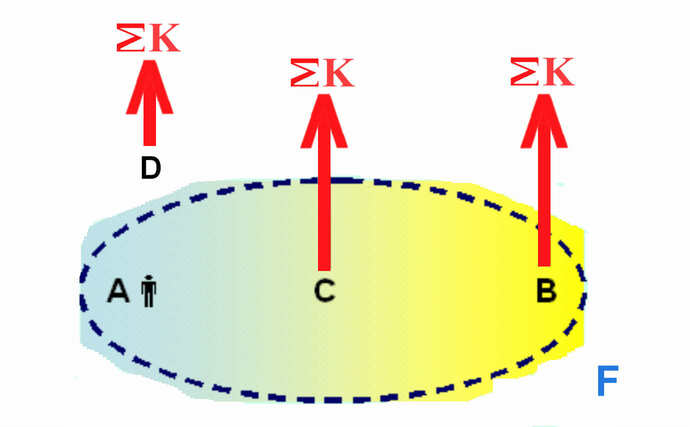 Conventional thinking tends to address known obstacles. Emergent Knowledge tackles the unknown obstacles; coaching the goal at B, the gap in C, and the outside influences in D, rather than the subject (person) at A directly.

Of more significance is that in the Six Degrees of Separation (or Small World) theory, links between people are commonly very unlikely or surprising. Connections tend not to be predictable and linear (straight line). Fascinated and inspired by this, David Grove translated Milgram et al.'s Six Degrees of Separation theory into a questioning process within Emergent Knowledge, which he termed 'Six Degrees to Freedom'.

Grove's Six Degrees to Freedom methodology acts to create a 'small network' of moves enable a subject (person) to reach his/her goal more quickly and with less effort than taking the 'obvious' route (which tends to be linear and conventional - a straight line, conceived by conscious, habitual or conditioned thinking).

Sometimes the strongest connections are made through the most obscure links.

In addition to the Six Degrees to Freedom questioning method, David Grove defined several new techniques for applying the methodology, here firstly in summary, and afterwards in more detail:

The facilitator asks the subject (person) to find a representation of his/her goal, for example by writing it on a sticky-note, or choosing an object in the room to represent it. The facilitator then asks a set of questions to ensure that the subject and the goal is in the best places from which to emerge knowledge.

For the subject to understand that there is more than oneself that may respond in any situation. The different forms of the questions address these different selves, some of which may be parts of the subject's psychological system which have become disassociated at some point in their lives. Example questions are:

The questions are asked of each pronoun: I, me, myself, and you.

To re-align or re-scale the subject's (person's) internal time signature to match that of his/her current reality. People sometimes become trapped in time-frames of events which traumatised them long ago - for example the expression:

This exercise dissolves these limits and releases the trapped knowledge and energy back to the subject.

In this process the subject (person) is encouraged to write down his/her insights, or goal, or life's purpose, on a piece of paper.

Then the facilitator asks questions about the words, letters or even the spaces between the words and letters, for example:

To emerge knowledge which may have been lost when the subject (person) was deflected from his/her life's congruent (true, natural) purpose.

Many people say that they have a sense that their lives have a 'pathway', if only they could find out what it is.

To tie the new knowledge and energy into tangible changes which will move the subject forward. As always in Clean processes, this is entirely led by the subject (person), facilitated by Clean questions from the facilitator, for example:

In this exercise, the facilitator asks the subject to draw his/her answers.

Clean Scapes can be incorporated into any of the exercises from time to time, so the subject can use words and images together.

As we move through life we accumulate layers of knowledge. Some layers become separated through time, or circumstances, or disturbing experiences. When the subject (person) physically moves to a different physical space, he/she is often able to access knowledge that had seemed lost.

This enables the subject to identify, 'download' pockets of knowledge which surface when the subject moves to a different space in the room.

As mentioned above, this was the first of the Emergent Knowledge exercises to be developed and was originally called 'Clean Space'.

In this exercise, the facilitator asks the subject (person) to face different directions, for example:

The process emerges knowledge which may be uncovered when the subject faces (or 'spins to') different directions.

For when/if the subject (person) crosses a boundary into the realms of therapy, or moves to a negative space which produces a difficult emotional reaction.

As these processes tap into the unconscious mind, there may be times when the subject has a strong emotional reaction.

Clean Aid provides a series of questions which will help the subject return to safer emotional ground, for example:

The latter question parallels solution-focused questions in coaching, which tend to shrink the problem and give the subject (person) energy and motivation to deal with it.

Relevance to Coaching and Counselling

The underpinning principles of Emergent Knowledge align well with other positive communications concepts.

Notably these principles are:

David Grove's Emergent Knowledge and related 'Clean' processes are entirely led by the subject (the person being helped, or 'coachee'). The facilitator does not 'contaminate' the content.

This is not only right and good for people (to determine their own answers and direction) but also, the theory suggests, crucial in making the methodology accessible and deliverable without the need for training in clinical therapy.

The process is 100% client led, so there is no danger of the facilitator causing mental or emotional damage to the subject, which might happen where a therapist is making diagnostic judgements and intervening in the subject's own unconscious processes.

These Emergent Knowledge materials were provided exclusively for Businessballs by Carol Wilson, a UK-based expert, trainer and author in David Grove's methods. Carol Wilson's biography and contact details are below. Carol's help in providing these learning materials is gratefully acknowledged.

Carol Wilson FILM FAC FPSA is a Fellow of the Institute of Leadership & Management, the Association for Coaching, and the Professional Speaking Association, is on the Global Advisory Panel at the Association for Coaching and is a Trustee to the non-profit MOE Foundation, where she designs coaching programmes for underprivileged young people and the African Prisons Project. A multicultural expert, Carol has designed coaching and leadership programmes all over the world for organisations including IKEA, Philip Morris, the BBC, Hilti and NCR, and manages our team of multi-lingual trainers.

She has won and been nominated for several awards for coaching and writing; she authored “ Performance Coaching, A Complete Guide to Best Practice Coaching and Training ” featuring Forewords by Sir John Whitmore and Sir Richard Branson; she has contributed to 6 books and published over 50 articles. Carol experienced the value of a coaching culture at first hand during a decade working at board level with Sir Richard Branson at Virgin. Later she held board level positions with Island Records, Warner Brothers and Polygram. During this time she signed and developed many famous artists including Sting, The Buzzcocks, Orchestral Manoeuvres in the Dark and Martha and the Muffins. Since entering the coaching field in 2000 she has studied with thought leaders including Nancy Kline and Tim Gallwey, and collaborated with Sir John Whitmore David Grove. Carol is a keynote speaker at conferences worldwide including The HR Summit Budapest, the Asian Emerging Leaders Summit Hong Kong, Guts for Change Mumbai, Catalyst Australia, HRD London, and the China Executive Coaching Conference Shanghai.